VICTOR HARA - SINGER OF LOVELY CHILEThis Chilean was destined to become not only a famous singer, poet and musician, but also the most significant victim of the regime of Augusto Pinochet. Victor Hara adhered to…

CANADIAN DIVA CELIN DIONThe vocal abilities of this singer cover five octaves. With her unique voice, she has long charmed music lovers around the world. And now she is rightly called one of…

THE QUEEN OF THE OPERA - GALINA VISHNEVSKAYAHer work embodies the whole era, so bright and exciting it turned out to be. The life of the great Galina Vishnevskaya was just as rich. The tragic pages of…

Perilous Lara FabianLara Fabian's voice bewitches from the first chords of any composition. She can not be confused with any singer, so distinctive is her style. She goes on stage almost without… 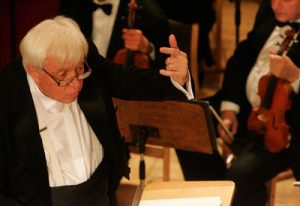 A student of the Mravinsky Kyiv resident Igor Blazhkov, who recently celebrated his eightieth birthday, is known to a whole generation of Soviet music lovers as one of the main propagandists of the “new music” in the USSR. He conducted the first performances of Schoenberg, Webern, Ives, Varese, Volkonsky, and corresponded with contemporary composers from all over the world, from Boulez to Stockhausen. As a student, he entered into correspondence with Igor Stravinsky and the first in the Soviet Union after a long break, performed his music, and later participated in the preparation of his arrival in 1962. He played a special role in the fate of Valentin Silvestrov and other representatives of the “Kiev avant-garde” – without his lively participation and support, their creative biography would have been completely different.

He was one of the first to become interested in the “Conservatory with Bach” library in the Kiev Conservatory, a two-hundred-year-old archive of old manuscript notes from the Berlin Academy of Songs, taken to the USSR during the war. The foundation included, in addition to the personal archive of Johann Sebastian Bach, and the works of other composers of the time. For many years, Blazhkov studied it, performing and recording with the Perpetuum Mobile Orchestra unknown works of the 18th century.

Below is an interview with Alexey Munipov.

– How did it happen that you were so carried away by the “new music”? How easy was it in Kiev in the 1950s?

– I was a student of the conductor faculty of the Kiev Conservatory and at first, like all my peers, I listened to Russian romantic music – Rachmaninov, Tchaikovsky. But he constantly included Western radio stations – the Warsaw Autumn Festival programs were broadcast from Warsaw ”, there were interesting programs from Zagreb. They twisted the classics of the XX century – Hindemith, Stravinsky, Onegger. Gradually, I moved from them to the avant-garde – Nono, Boulez, Xenakis, Stockhausen. And, of course, to the New Vienna School. Then, by the way, I was interested in modern painting. There was a new vision in all this. But most of all I was shocked by Stravinsky, and first of all – “The sacred spring”. Which, however, amazes me today. He shook me so much that in 1957 I, at the Conservatory, tried to conduct a suite from The Firebird. Actually, Stravinsky was then banned from performing in the USSR, so I decided to promote this business through the NSO, the student research community, since it encouraged all independent work of students and was rather independent of the university administration. We found the score in the conservatory library, together with my first wife painted voices, a billboard was drawn by hand, rehearsals had already begun. But the orchestra – and it was the orchestra of the opera studio – made a terrible noise: what are we all playing at all? Ran to the management, and the concert was canceled. And I was expelled from the conservatory. Mom saved me by walking the stations for a long time. They did not want to restore me, but then they still restored me – they took into account that I was the son of the deceased at the front.
In 1959, there was a state examination in conducting, and I again volunteered to conduct the same suite. I was 23 then. For two years, the policy softened a bit, but then some warming went on every year, so this time I was allowed to do what I wanted.

– So you were a very stubborn young man.
– Yes, not without it. And, in general, it turned out that I was the first to perform Stravinsky in the USSR after a long break. I think the last time it sounded in the Soviet Union somewhere in the early 1930s, and by the end of the thirties, it was completely banned. So his music has not sounded in the country for twenty years. Already after me, I know, someone performed one of his small suites in Leningrad, and already closer to his official tour his works began to be performed in many cities. Just at that time, Ukrainians from Canada studied at the conservatory. I was very friendly with one of them and gave him a letter to Stravinsky, without an address. Asked – find out the address, write and send. What was done.

– Did you have a feeling that you are doing something revolutionary? And at the same time dangerous – because you have already been expelled from the conservatory for Stravinsky?
– Neither one nor the other. In general, then, I must say, I was an absolutely fearless person. I do not know why. For me, the danger did not exist, or rather, I somehow did not take it into account – I simply did not feel, did not anticipate. Played, played, that’s all. Of course, I understood what I was doing. Stravinsky is an emigrant, everyone around him: both the Ministry of Culture and the Union of Composers. I remember absolutely outrageous articles by Kabalevsky in “Soviet music”: they say Stravinsky is a Catholic old man who drags decadent ideas in his writings. I remember all this very well. But I’m not that … There was no special call.

DEATER BOLEN - POP-IDOL OF EUROPEThe name of Dieter Bohlen is a strong association with the group Modern Talking, but he has achieved a lot in life and outside this team. In Germany, he is…